This tutorial introduces the Canvas component for creating simple two-dimensional graphics. You'll build an app that lets you draw on the phone screen in different colors.

Historical note: PaintPot was one of the first programs developed to demonstrate the potential of personal computers, as far back as the 1970s. Download Book Chapter PDF 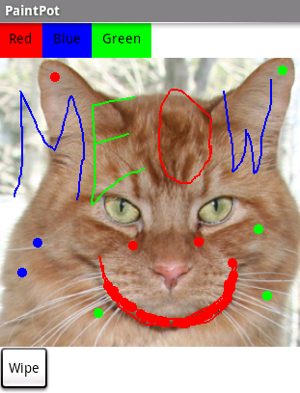 With the PaintPot app, you can:

This tutorial assumes that you have completed the HelloPurr tutorial. This tutorial introduces the following App Inventor concepts:

Make sure your computer and your mobile device are set up to use App Inventor. Open App Inventor in a browser window, start a new project, and name it "PaintPot".

To get started, go to the Properties panel on the right of the Designer window and change the screen Title to "PaintPot". If you connect to the Companion on a mobile device, you should see this change on the device, with the new title showing in the title bar.

You'll use these components to make PaintPot:

That makes five components in all. Let's get them and build the app.

Here's how this should look in the Designer, with the button names appearing in the list of project components. In this project, you're changing the names of the components rather than leaving them as the default names as you did with HelloPurr. Using meaningful names makes your projects more readable to yourself and others.

Connect to the AI2 Companion using the "Connect" menu. You should also see the three buttons on the mobile device screen.

You should now have three buttons, one below the other. The next step is to make them line up horizontally. You do this using a HorizontalArrangement component.

If you look in the list of project components, you'll see the three buttons indented under the ThreeButtons to show that they are now its subcomponents. Notice that all the components are indented under Screen1.

You should also see your three buttons line up in a row on the screen of your mobile device, although things might not look exactly as in the Designer. For example, the Arrangement's outline shows in the Designer but not on the device.

The final two components are the Canvas and the Wipe Button.

You've now completed the steps to set the appearance of your app. Here's how this should look in the Designer. Next, you'll define how the components behave.

Click the Blocks button to switch to the Blocks Editor. First you will code the buttons that change the paint color. Later you will add blocks to code what happens when someone touches or drags the screen.

In the Blocks Editor:

The blocks for the buttons should look like this:

Now for the next step: drawing on the Canvas. You'll add blocks so that when you touch the canvas, you get a dot at the spot where you touch. If you drag your finger slowly along the canvas, it draws a line.

You've already seen button click events. Clicks are simple, because there's nothing to know about the click other than that it happened. Other event handlers such as when ... Touched need information about the event. In App Inventor, this information is expressed as the value of arguments associated with the event handler. For the when ... Touched event, the first two arguments stand for the x and y coordinates of where the touch happened. We'll save touchedSprite for a later tutorial.

On the right side of the call DrawingCanvas.DrawCircle block are four sockets where you must specify values for the x and y coordinates where the circle should be drawn, radius, which is the radius of the circle, and fill, which is true to draw a filled circle, or false to draw an outlined circle. For x and y, you'll use the values of the arguments that were supplied to the Touched handler:

Here's how the touch event handler should look:

Try testing out what you have so far on the device. Touch a color button. Now touch the canvas, and your finger should leave a dot at each place you touch. Touching the Wipe button should clear your drawing.

Finally, add the drag event handler. Here's the difference between a touch and a drag:

When you drag your finger across the screen, it appears to draw a giant, curved line where you moved your finger. What you're actually doing is drawing hundreds of tiny straight lines: each time you move your finger, even a little bit, you extend the line from your finger's immediate last position to its new position.

A drag event comes with 6 arguments. These are three pairs of x and y coordinates that show:

There's also a sprite, which we'll ignore for this tutorial.

Now make the app draw a line between the previous position and the current position by creating a drag handler:

Test your work by trying it on the device: drag your finger around on the screen to draw lines and curves. Touch the screen to make spots. Use the Wipe button to clear the screen.

In PaintPot Part 2, you'll see how to use global variables to create dots of different sizes.

Scan the Sample App to your Device

Scan the following QR code onto your device to install and run the sample app.