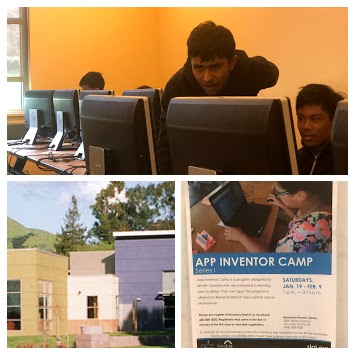 In the Fall of 2018, San Jos Public Librarys Berryessa Branch Library in Santa Clara County was introduced to the existence of MIT App Inventor and the global community of app developers around it by a volunteer. A request to conduct a workshop by now engaged volunteer Ashvin Maheshwar piqued their interest. Tiffany Bradford-Oldham, "Librarian II with the San Jos Public Library and Coding5k Challenge Coordinator" reviewed the curriculum and after a few iterations and tweaks decided to launch a series of month long workshops on Saturdays. Tiffany commented, Silicon Valley powers innovation globally and offers many opportunities for STEM-based careers. Passionate volunteers with quality programs like Ashvins allow the San Jose Public Library to provide opportunities to introduce students to coding. The City of San Jose is committed to providing coding experiences across the city especially in underrepresented neighborhoods. The Coding5K programs focuses on building skills that reinforce academic success as well as encourage students to consider paths leading towards STEM related careers. It is wonderful that we were able to partner with Ashvin as I feel his program has been that spark to inspire participants to further their interest in coding.

Berryessa Branch Library regularly conducts several tech and arts workshops for kids. They were keen on including younger kids (8-12 years) targeting the first 4-week workshop in January towards that age group. The first session saw kids arrive with parents in tow who participated in the workshop to support their child. The most rewarding moment was to see parents also get excited and become active learners in the workshop due to the simplicity of MIT App Inventor. It further confirmed the notion that app building is exciting for all ages. 7 apps were submitted to the App Inventor of the Month Challenge.

On the heels of the successful pilot launch, the library decided to move up the age group to 12-15 and saw increased interest. The second workshop series in February saw a class of 12 enthusiastic middle-school students. Ashvin recalls "In the first 30 mins, it was clear that these kids were eager to learn and think through creative app ideas. They were a step ahead of me and I had to adapt quickly and fine-tune my curriculum on the fly. But, it was exciting and fun. The next two workshops featured repeat students well-prepared for increased interaction, faster pace of learning and great ideas for new apps. The goal was the same for everyone. Learn, create and have fun building useful apps. Then the exciting news came that Thien-Mai Buis Study Harder app submitted at the conclusion of March workshop won the Teen Inventor Award!

This is a big deal. Hundreds of apps are submitted every month from all over the world and to see Thien-Mais app is very inspiring and rewarding, said Ashvin. Tiffany added, I am happy that these types of coding programs not only encourage our local youth to learn to code but give youth an opportunity to be recognized for their work. I am happy that Thien-Mai Bui has been recognized for the Teen Inventor Award and we hope this is just the beginning of their future success. So far, 35+ students have benefited from the workshop, 20 apps have been created and counting. Berryessa Branch Library and Ashvin through his non-profit No App Maker Left Behind are both motivated to continue the series throughout the year and are working on future plans to spread the wealth of MIT App Inventor to young learners.