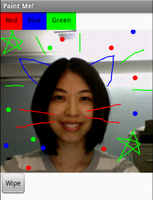 In this lesson, you will build a Drawing app which lets you draw on the phone's screen by choosing a color and then dragging your finger around the screen. The app also lets you use the phone's camera to take a new picture and use it as the canvas for drawing.

The second part of this lesson introduces drawing dots of different sizes by tapping on the screen.

With the Paint Pic app, you can:

After you've built the Paint Pic app, you will understand:

Step 3: Make three buttons On the left column of the Designer, open the Basic palette, and first drag three Buttons over to the Viewer

Step 4: Color code and rename the buttons Click on Button1 component in the Components pane in the Viewer to highlight it (it might already be highlighted) and use the Rename button to change its name from "Button1" to "ButtonRed" (#1).

Change the button's Text attribute to "Red" at the Properties pane (#2) and make its BackgroundColor "red" (#3).

Similarly, make two more buttons (Button2 and Button3) for blue and green. Name them "ButtonBlue" and "ButtonGreen", placing them vertically under the red button. 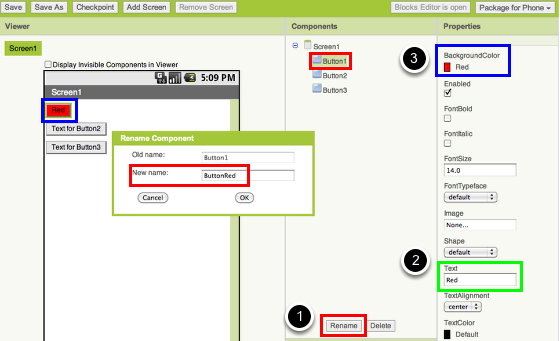 Step 7: Add a Canvas From the Basic palette, drag a Canvas component onto the Viewer. Change its name to "DrawingCanvas," and set its Width to "Fill Parent." Set its Height to 300 pixels.

Step 8: Add a camera component From the Media palette, drag a Camera component onto the Viewer. Notice that it drops down into the invisible components area at the bottom of the screen.

Step 9: Add a button to activate the camera From the Basic palette, drag the Button component and drop it right below the horizontal arrangement (#1). Change its text property to "Take A Picture!" (#2) and rename the button to "CameraButton" (#3).

Step 10: Add a Wipe button and arrange it horizontally with the Camera button From the Basic palette, drag another Button component and place it under the ButtonCamera, which you just created. Change its name to "ButtonWipe", as well as its Text attribute to "Wipe". From the Screen Arrangement palette, drag out a HorizontalArrangement component and place it right under the ThreeButtons component (the first horizontal arrangement) buttons in the Viewer. Bring the ButtonCamera and the ButtonWipe inside of this Horizontal Arrangement side by side, just like you did for the three buttons in Step 5.