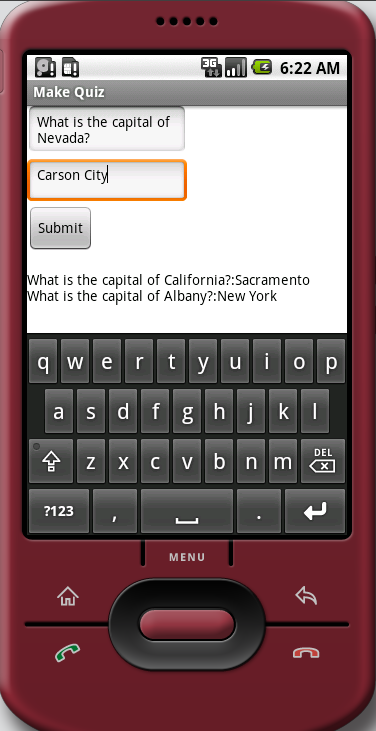 MakeQuiz and TakeQuiz are two apps that, in tandem, allow a teacher to create quizzes for a student. Parents can create fun trivia apps for their children during a long road trip, grade school teachers can build "Math Blaster" quizzes, and college students can build quizzes to help their study groups prepare for a final. This tutorial will walk you through creating both the MakeQuiz and the TakeQuiz app.

This tutorial is a followup of the QuizMe tutorial -- if you haven't completed that tutorial you should do so before continuing.

Connect to the App Inventor web site and start a new project. Name it "MakeQuiz", and also set the screen's Title to "MakeQuiz". Open the Blocks Editor and connect to the phone.

TakeQuiz will work similarly to the QuizMe app-- in fact you'll build it using QuizMe as a basis. TakeQuiz will differ in that the questions asked will be those that were entered into the database using MakeQuiz. 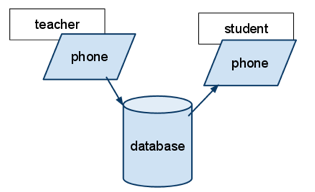 Set up the Components for MakeQuiz

Use the Component Designer to create the interface for MakeQuiz. When you finish, it should look something like the snapshot below (there are also more detailed instructions below the snapshot). 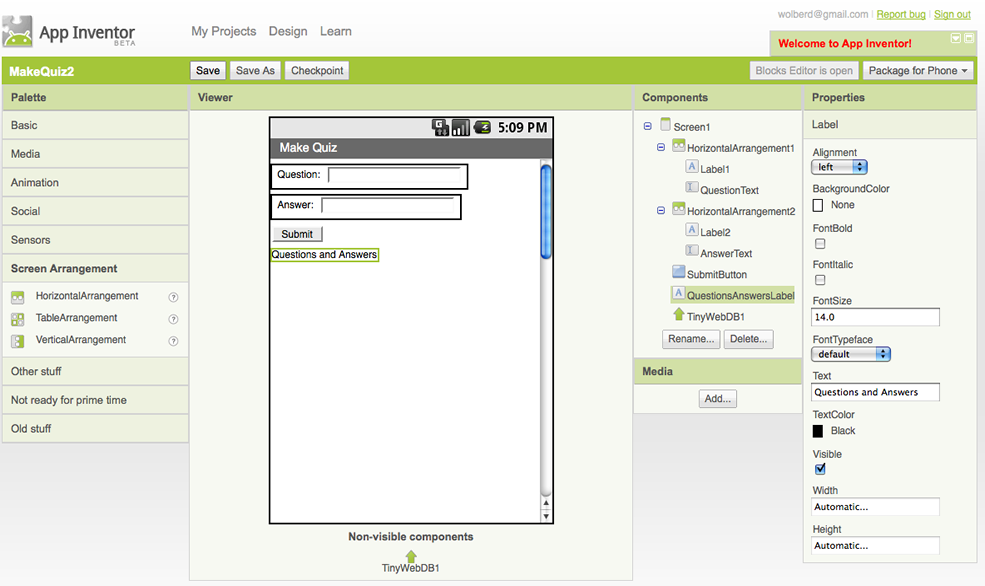 You'll use the following components to create MakeQuiz. Drag each component from the Palette into the Viewer and name it as specified below:

Set the properties of the components in the following way:

Add behaviors to the components

Open the Blocks Editor to add the behaviors for the app. As with the original QuizMe app, you'll first define some global variables for the QuestionList and AnswerList , but this time you won't provide fixed questions and answers. You'll need the following blocks:

Note that, unlike the original QuizMe app, the lists are empty to begin with. This is because with MakeQuiz and TakeQuiz, all data is created by the user of the app (it is user-generated).

The first behavior you'll build is for handling the user's input. Specifically, when the user enters a question and answer and clicks submit, you'll use add item to list blocks to update the QuestionList and AnswerList. 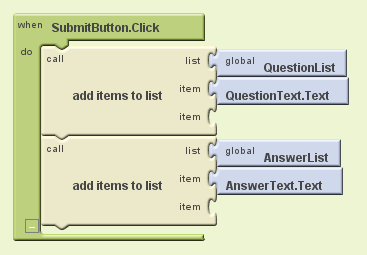 add items to list appends each item to the end of a list. Here, the app takes the text the user has entered in the QuestionText and AnswerText text boxes and appends each to the corresponding list.

The behavior updates the hidden QuestionList and AnswerList variables, but the changes are not shown to the user. To display these lists, create a procedure "displayQAs" which makes a text object with both lists and places it into the QuestionsAnswersLabel. Then make sure to call the procedure at the bottom of SubmitButton.Click. You'll need the following blocks:

The displayQAs procedure is called after the lists are modified in SubmitButton.Click. The QuestionsAnswersLabel is modified to display the two lists separated by a colon. By default, App Inventor displays lists with surrounding parenthesis and spaces between items:

Of course, this is not the ideal way to display the lists, but it will allow you to test your behavior for now. Later, you'll modify the displayQAs procedure to display a list on separate lines, and to display each question together with its corresponding answer.

Blanking Out the Question and Answer

When a user submits a question-answer pair, you should clear the QuestionText and AnswerText text boxes so they're ready for a new entry.

Here's how the blocks for the updated event handler should look: 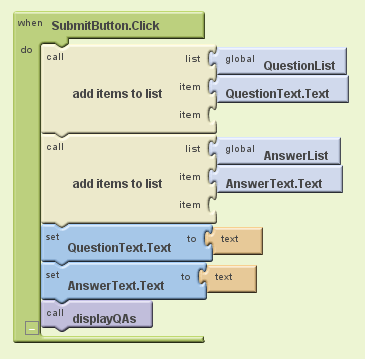 When the user submits a new question and answer, they are added to their respective lists. At that point, the text in the QuestionText and AnswerText is "blanked out" with empty text blocks (you create an empty text block by clicking on the the block's text and pressing the delete button).

Storing the questions and answers in a database

As is, the app records the questions and answers entered by the user, but only in the phone's temporary memory. All variables in App Inventor are transient data-- they are stored on the phone and the data only "lives" through one run of an app. When the user closes the app, the data is lost.

The MakeQuiz app needs to record the questions and answers in a database. This will allow the quiz creator (teacher) to always edit the latest update of the quiz. It will also allow the TakeQuiz app to load the quiz and administer it to the student.

You'll use the TinyWebDB component to store and retrieve the QuestionList and AnswerList to and from a database. TinyWebDB allows you to store data in AppInventor-compliant databases that live on the web instead of on the phone.

Start by storing the QuestionList and AnswerList in the database each time the user enters a new pair. You'll need the following blocks: 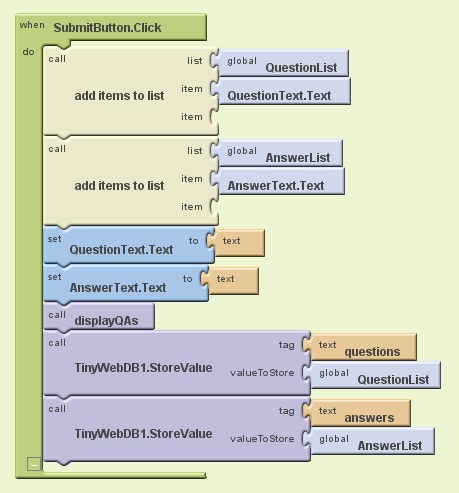 Although our example uses "questions" as the tag, you should actually use your own tag, e.g., "DavesQuestions", because by default, the database entries of all App Inventor programs share the same namespace and so your list of questions may get confused with someone else's list of questions since you both used the same tag. For more information, see Creating a Custom TinyWebDB service.

Loading data from a TinyWebDB database is a two-step process. First, you request the data by calling TinyWebDB.GetValue and providing a tag.

GetValue only requests the data from the web service. After the request is made, your app can do other things, such as responding to user actions, while it waits for the TinyWebDB web service to send the data. When the data arrives, a TinyWebDB.GotValue event is triggered. When that event occurs, the data requested is in a variable named "valueFromWebDB". The tag you requested is in the variable "tagFromWebDB". You can access these variables in the TinyWebDB.GotValue event handler.

In this case, the app needs to request two things from the TinyWebDB web service, the questions and the answers, so the Screen1.Initialize will make two calls to getValue. When the data arrives and the GotValue event-handler is triggered, the app should check the tag to see which request has arrived, and then load the corresponding list. Once the lists are both loaded, displayQAs can be called to display them. 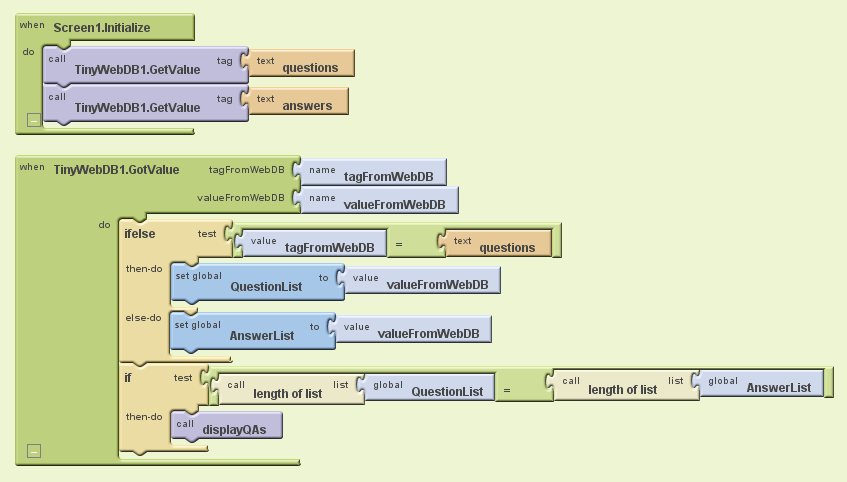 When the data arrives from the web database, the TinyWebDB1.GotValue event is triggered. Since two requests were made, it will be triggered twice, once for each list.

In the GotValue event-handler, the value returned is in the variable valueFromWebDB . The corresponding tag is in tagFromWebDB . The blocks first check to see which request has returned (even though the request for "questions" is made first in Screen1.Initialize, there is no guarantee that the QuestionList will arrive first). If the tag is "questions", the valueFromWebDB is put into the variable QuestionList. Otherwise (else) it is placed in the AnswerList.

At the bottom of GotValue, the app checks to see if both lists have been loaded-- one way to check is to see if the lengths of the lists are the same. If they are, displayQAs is called to display them on the phone.

The version of MakeQuiz you've created so far works: the user can create a quiz and it will be stored persistently in the database. If you can accept the fact that the quiz is displayed in an inelegant way, you can proceed to creating the sister app, TakeQuiz, which lets a user step through the quiz and answer the questions.

If you'd like to learn how to display list data in a more elegant fashion, step through the steps directly below.

In the app you've built so far, the question and answer lists are displayed separately and with the default list display format, e.g.,

In this section, you'll modify the app so that the newly entered question-answer pairs are displayed in tandem, one on each line:

Displaying the data in this way is non-trivial, so you'll start by first displaying a single list, the QuestionList, with each item on a separate line.

All the changes will occur in the procedure displayQAs. You'll remove the blocks within that procedure, and use a foreach block to build the text by successively adding each question. The blocks within the foreach should add the current item (question) to the end of the text object (QuestionsAnswersLabel) you are building. You'll need the following blocks:

The foreach block specifies that the blocks within it are to be executed once for every item in QuestionList. If there are three questions, then the inner blocks will be executed three times. Within the foreach, the current item being processed is named question.

On each iteration, QuestionsAnswersLabel.Text is modified. Each time it is set to its previous value, along with the newline character, "\n" and the current question being processed.

Including the answer in DisplayQAs

The displayQAs procedure you've created ignores answers and only displays questions. In the next version of displayQAs , you'll display the data as question-answer pairs, e.g.,

Modify displayQAs. Use an index variable to access each answer as the foreach block walks through the questions. You'll need the following blocks: 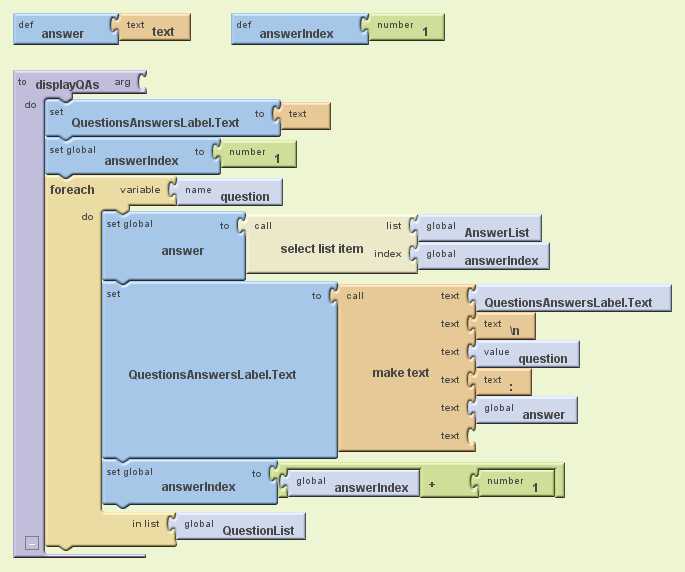 The foreach only allows you to iterate through one list. In this case, there are two lists and you need to step through and select each answer as you proceed through the questions. The strategy is to use an index variable, as was done with the currentQuestionIndex in the QuizMe tutorial. 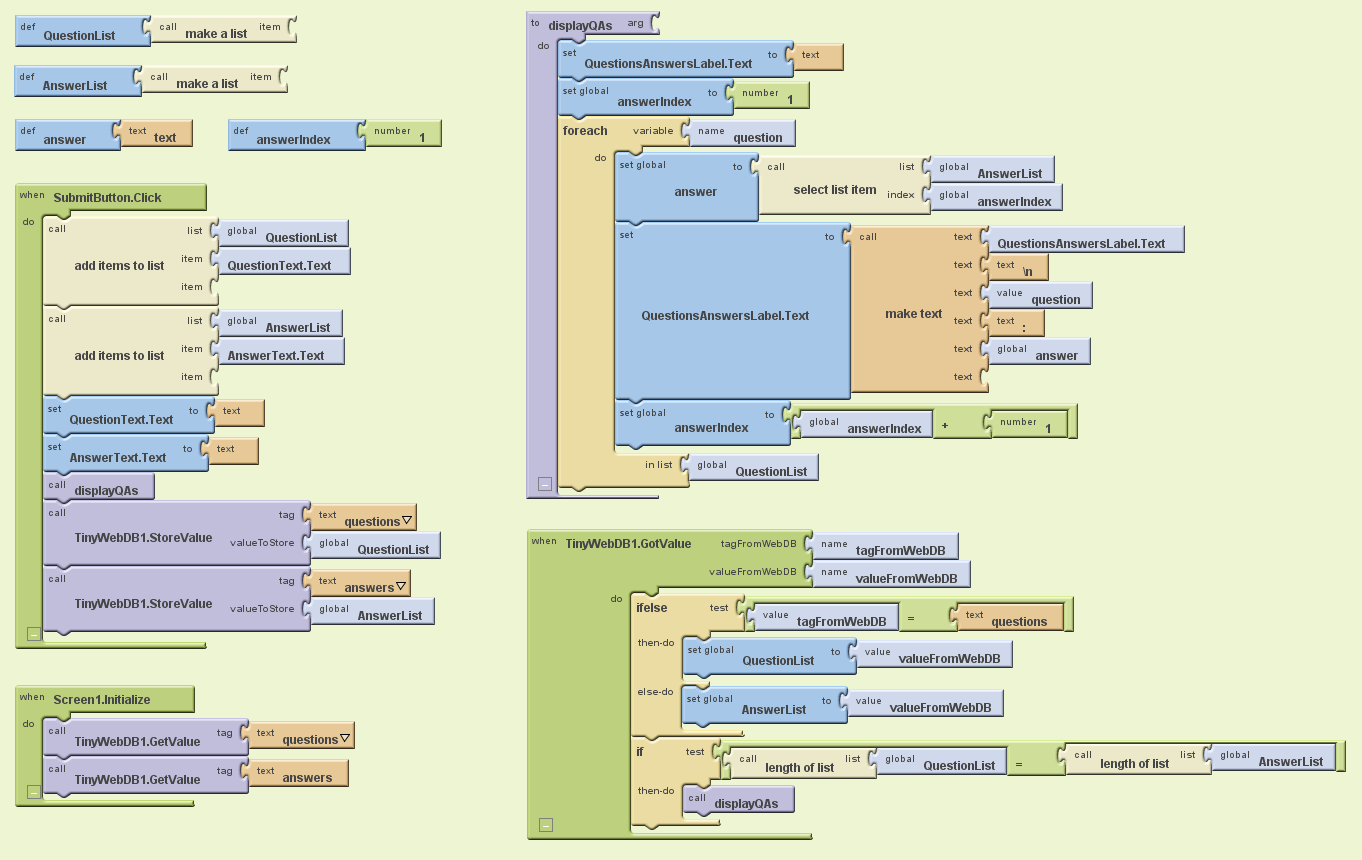 Scan the following barcode onto your phone to install and run MakeQuiz. 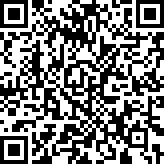 Building TakeQuiz is simpler; it can be built with a few modifications to the QuizMe app you completed earlier (if you have not completed that tutorial, do so now before continuing).

Begin by opening your QuizMe app, choosing SaveAs, and naming the new project "TakeQuiz." This will leave your QuizMe app as is and allow you to use a copy of it as the basis for TakeQuiz.

This version of MakeQuiz/TakeQuiz does not handle images, so first remove the images from the TakeQuiz app:

Since TakeQuiz will work with database data, drag a TinyWebDB component into the Component Designer viewer.

Now modify the blocks so that the quiz given to the user is the one from the database. First, since there are no fixed questions and answers, remove all of the actual question and answer text blocks from the make a list blocks within the QuestionList and AnswerList. The blocks should look like this:

Now modify your Screen1.Initialize so that it calls TinyWebDB.GetValue twice to load the lists. The blocks should look like this:

Finally, drag out a TinyWebDB.GotValue event-handler. This event-handler should look similar to the one used in MakeQuiz, but here you only want to show the first question and none of the answers. The blocks should look like this:

When the app begins, Screen1.Initialize is triggered and the app requests the questions and the answers from the web database. When each of those requests arrives, the TinyWebDB.GotValue event-handler is triggered. The app asks which request has come in, using tagFromWebDB , and places the valueFromWebDB into the appropriate list. If it is the QuestionList being loaded, the first question is selected from QuestionList and displayed. 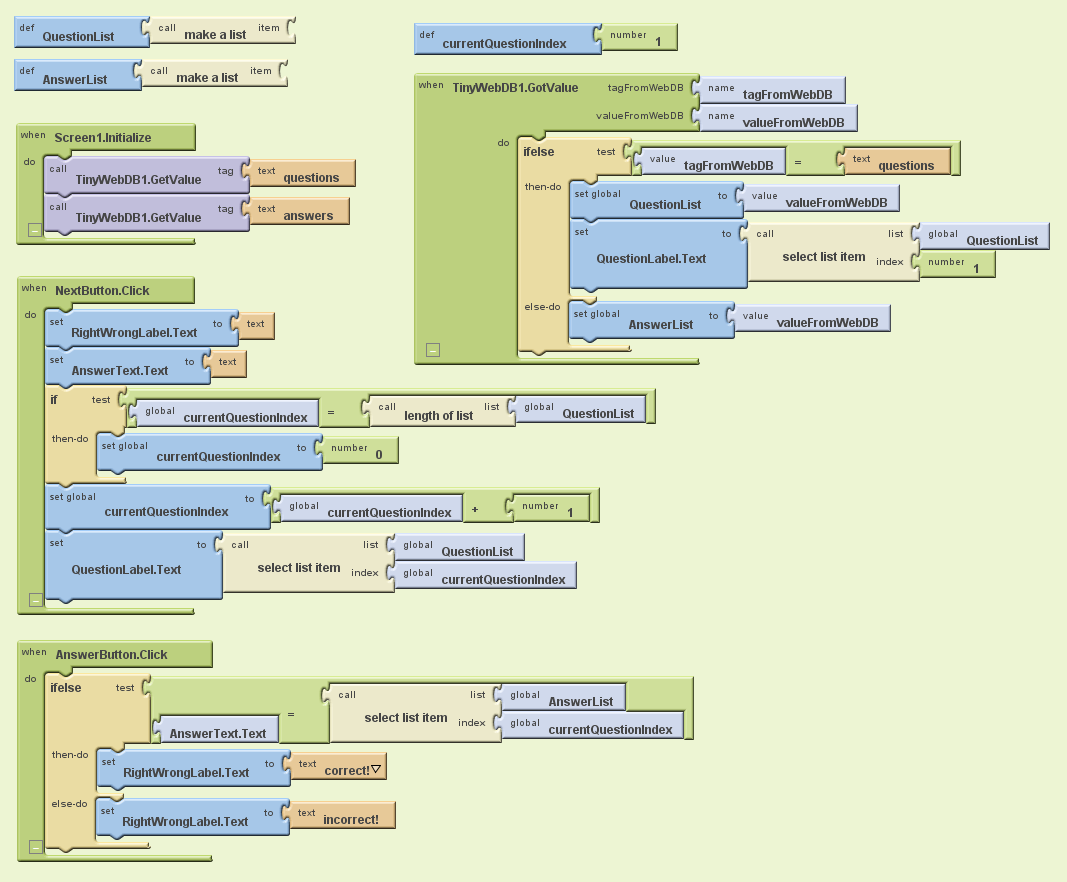 Scan the following barcode onto your phone to install and run Take Quiz. 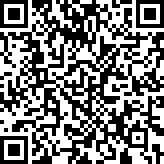 Once you get MakeQuiz and TakeQuiz working, you might want to explore some variations. For example,