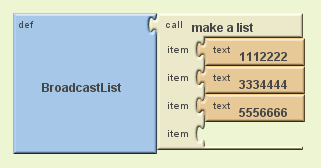 When you want to display such a list on the phone, you can plug it into the Text property of a Label, such as in this example:

The user can see the data, but it's not very elegant. Generally lists are displayed on separate lines or with commas separating each item.

To display a list more elegantly, you'll serialize it-- write blocks to move the list items into the Label with the formatting you want. You can display the items on separate lines, add decorative text-- just about anything you can imagine. To serialize a list, you'll use a foreach block to successively add each item to the Label.

Here's a sample that displays the BroadcastList on separate lines. The blocks are within a procedure which you call anytime the list is modified.

Text objects generally consist of letters, digits, and punctuation marks. But text can also store special control characters which don't map to a single character. "\n" is such a control character. When it appears in a text block, it means "go down to the next line before you display the next thing." So the text "1112222\n3334444\n5556666" would appear as:

Let's trace the blocks to see how the BroadcastListLabel is built. Tracing means to show how each variable/property changes as the blocks are executed. Since there is a foreach, we'll consider the values after each iteration-- each time the blocks within the foreach are executed:

As the table shows, the foreach block performs the task of successively placing the next item of BroadcastList into the variable number. On first iteration, pnumber is 1112222, on second 3334444, and on third 5556666. foreach does part of the work for you-- you don't have to explicitly set the variable pnumber to one of the items in the list.