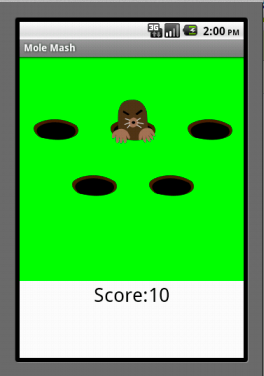 This tutorial shows you how to build a game similar to the Whac-A-Mole™ arcade game. The goal is to tap a mole that randomly pops out of one of five fixed holes. Every time you succeed, your score is increased by one point.

In order to highlight App Inventor features Any Component and ImageSprite Z-layering, this app takes a slightly different approach than the original Mole Mash tutorial, which you do not need to have completed in order to complete this one. You should, however, be familiar with the basics of App Inventor, using the Designer to build a user interface and using the Blocks Editor to code an app's behavior. If you are not familiar with the basics, try stepping through some of the basic tutorials before continuing.

Open ai2.appinventor.mit.edu and start a new project. Set the screen's Title property to an appropriate name, such as "Mole Mash". Download the image files below (created by Yun Miao) to your computer by right-clicking on them, and then add them to your project by pressing the "Upload File ..." button in the Media pane.

The user interface will contain a total of 6 ImageSprites: 5 unmoving holes and 1 mole. The mole will move on top of the holes. Use the Designer to create the user interface. When you are done, it should look something like the picture below. Don't worry about lining up the holes evenly. You will specify their locations through their X and Y properties. Additional instructions are below the image.

The following is the list of components you will add:

Make the following changes to the components' properties:

Don't worry now about setting the Picture property for the holes; we'll set the property in the Blocks Editor.

Here is an overview of what we need to create blocks to do:

To proceed, switch to the Blocks Editor.

Create the variable and name it holes. For now, we will give it a "dummy" initial value of an empty list. We'll set the real initial value in the Screen1.Initialize event handler, which gets executed each time the app loads the screen. Here is a picture and list of the blocks you will need:

Comments (created by right-clicking on a block) are encouraged but not required.

The first event to occur in any app is Screen1.Initialize, so we will put start-up code in that handler. Specifically, we will add the hole components to the list holes, set each hole's Picture property to "hole.png", and call MoveMole. Since we have not yet written MoveMole, we will create an empty procedure with that name, which we will fill in later.

Below are a table of the blocks you need to create. Note that the "Any ImageSprite" drawer is found under the "Any component" tab at the bottom of the list of Blocks in the Blocks Editor. 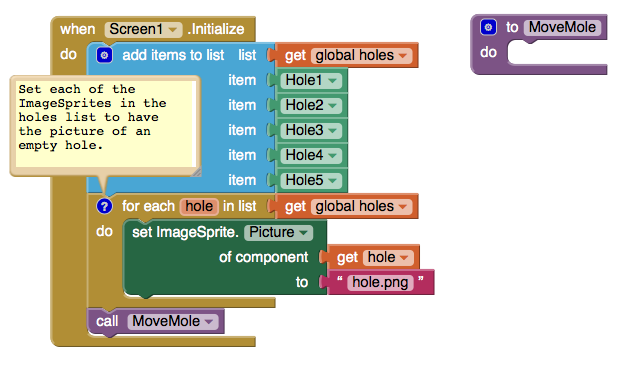 Compare the for each block to the equivalent blocks that would be necessary without it:

Not only is the left set of blocks shorter, it is less repetitious, sparing the programmer from semi-mindless copy-and-pasting and making it easier to modify, for example, if the name of the picture is changed.

Now let's fill in the body of the procedure MoveMole, which we'll call when the program starts, when the mole gets touched, and when our Timer goes off every second. The procedure should pick a random hole and move the mole on top of it. Here are the compiled blocks and a table of the blocks used:

We now need to specify that MoveMole should be called whenever MoleClock's Timer goes off. We just need two blocks to accomplish that:

Finally, we need to specify what happens when the mole is touched. Specifically, we want to:

We can easily translate these to blocks:

Here are some variations you might want to implement:

You can see how to implement the first two variations in the original Mole Mash tutorial.

Here are some of the concepts covered in this tutorial:

Scan the following barcode onto your phone to install and run the sample app.