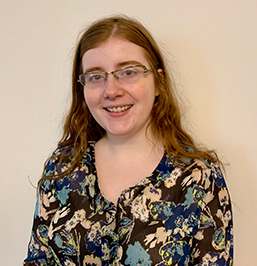 This is a guest blog by MIT App Inventor UROP Murielle Dunand.

Over January 2020, MIT App Inventor, partnered with C6 Bank, sent a group of six students over to the city of São Paulo to teach App Inventor. Our group consisted of students Murielle Dunand, Diego Escobedo, Tommy Heng, Victor Horta, Talia Pelts, and Viktoriya Tabunshchyk. We were a mix of undergraduates and graduates, Portuguese speakers, and App Inventor lab members, but we all stuck together to teach App Inventor in Brazil. 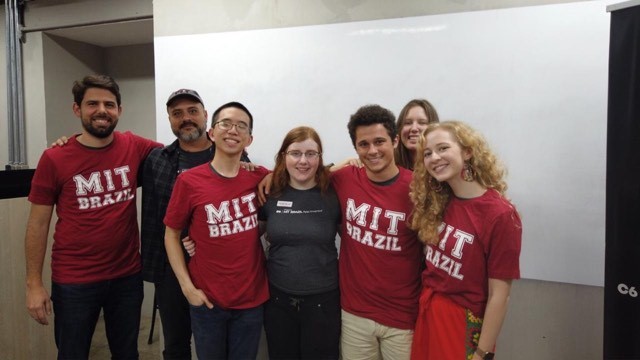 Our trip was sponsored by C6 Bank, a Brazilian online bank with headquarters in São Paulo. They saw the potential in App Inventor to promote financial literacy in communities. Both before and during the trip we worked closely with the App Inventor lab and C6 Bank. Our group of students met periodically during the semester preceding the trip, and we set up an introductory curriculum that taught the basics of App Inventor. We discussed the timing with Marina Mancini, a representative of C6 and Marisol Diaz, Senior Administrative Assistant for App Inventor. We also came into contact with the wonderful Daniel Paz de Araújo, an App Inventor Master Trainer based in Brazil. He offered us input on the tutorials we were setting up and translated them to Portuguese for even greater accessibility. We thank all of them especially!

Our event lasted for all four weeks of January. We taught three different groups of participants. Some of them were C6 employees, while others were high school students or engineers themselves.

During the first week, we gathered student input on the tutorials. On the first day, we introduced ourselves and then got everyone interested in App Inventor with our Hour of Code tutorials. As the days went on, we had to think on our feet and changed some of the curriculum based on student input. For example, because game tutorials were so well-received, we replaced one of our tutorials with the MoleMash tutorial and let them implement their own expansions to the game.

By the end of the week, we had become friendly with many of the participants and confident in working with them for the following week. We also decided which of these current participants would come back as multipliers for the subsequent sessions. This means that they would come back for the third or fourth weeks to help teach new participants with our group. With this training at teaching people about App Inventor, they could continue to “multiply” the knowledge in their own communities after the training.

During the second week, we set them to make their own projects in groups of two. For the first few days, we led them in design thinking and physical prototyping tutorials and set concrete goals. Then, we set them loose and remained available to help and answer questions for implementation. On Friday, each of the groups presented to the class, and we offered prizes based on implementation, style, and idea. C6 had also kindly set up a lovely group snack with the classic pão de queijo treat, so we had the chance to bid our new found friends good luck and farewell.

That weekend, we also ran an App Inventor hackathon at the C6 building itself for its employees. The goal was to create an app that promoted financial literacy, one of C6 Bank’s main goals. We split the participants into groups of two and offered a short tutorial on App Inventor blocks, then let them design their app. They were all extremely quick to learn and came up with great apps in just a few hours, so it was difficult to pick a winner! This was a great experience and explored a novel application of App Inventor that could do a lot of good in communities.

For the third week as well as the fourth week, we had a fresh group of participants to teach. Thanks to our previous experience and the multipliers to help, this went extremely smoothly. The multipliers were extremely helpful, and we worked to put them in leadership roles. Some of them ran tutorials themselves, or translated into Portuguese as we spoke, and all of them provided tremendous help by going around and offering answers to questions students had. We found that having multipliers as a system is highly beneficial to the App Inventor style of learning and are very happy with it.

We spent our final evening in São Paulo sharing a celebratory dinner with other MIT students in Brazil, Marina, and Marisol. We had the chance to relive our experiences and thank them for their great support. 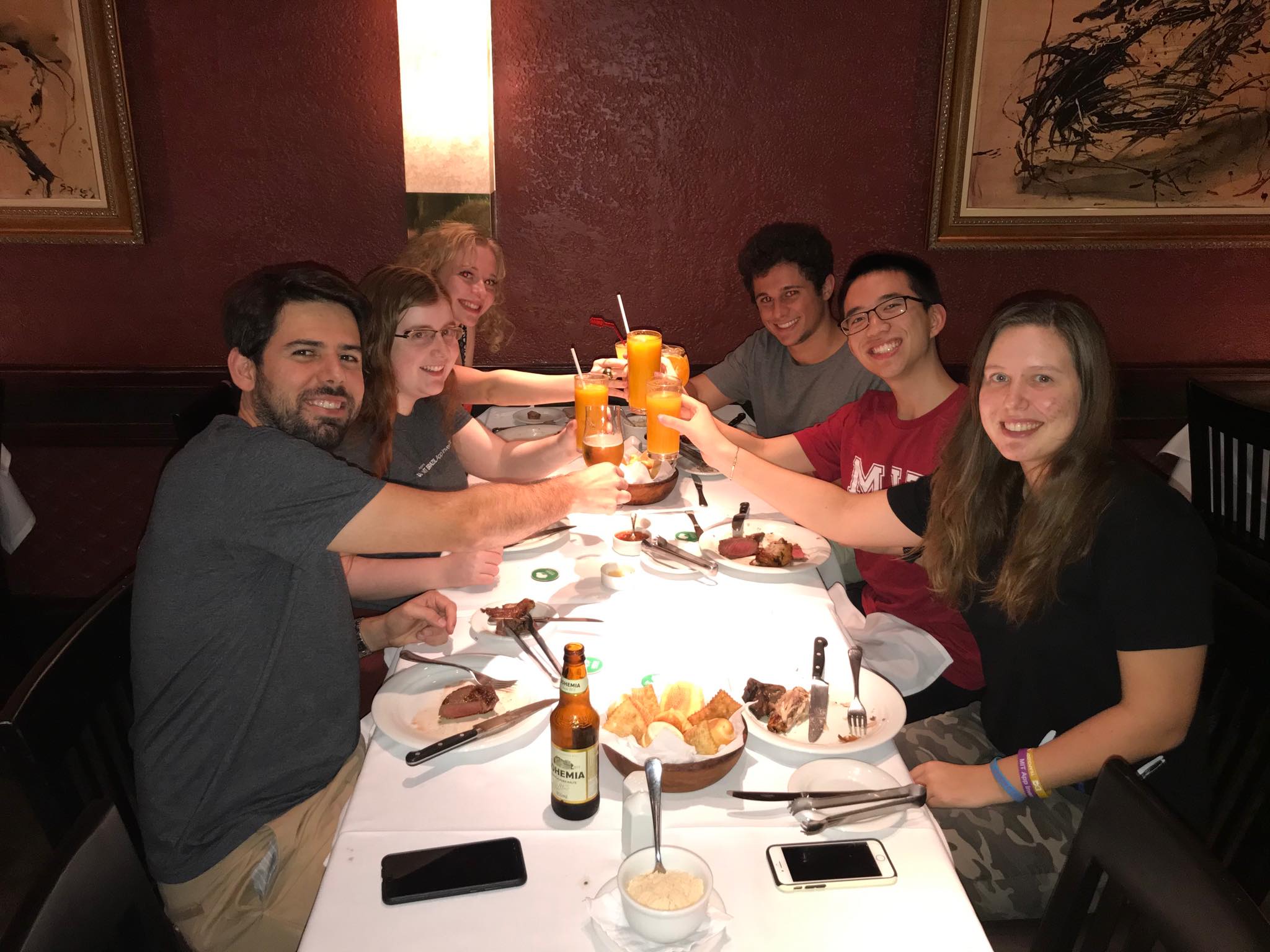 Our group had had the chance to teach App Inventor as well as become closer through our teamwork and problem-solving. We had even had the chance to visit the local beaches and the city of Rio de Janeiro over the weekends. Though we returned to MIT one day later, our group remained close. Several of us continued our work with the App Inventor lab or even used App Inventor in other events to teach. We have recently met to catch up and share some delicious Brazilian pão de queijo, and have found ourselves lifelong friends. We would like to thank MIT App Inventor and C6 Bank for this opportunity to both teach and learn, and hope that we have helped ignite more desire to learn App Inventor around the world. 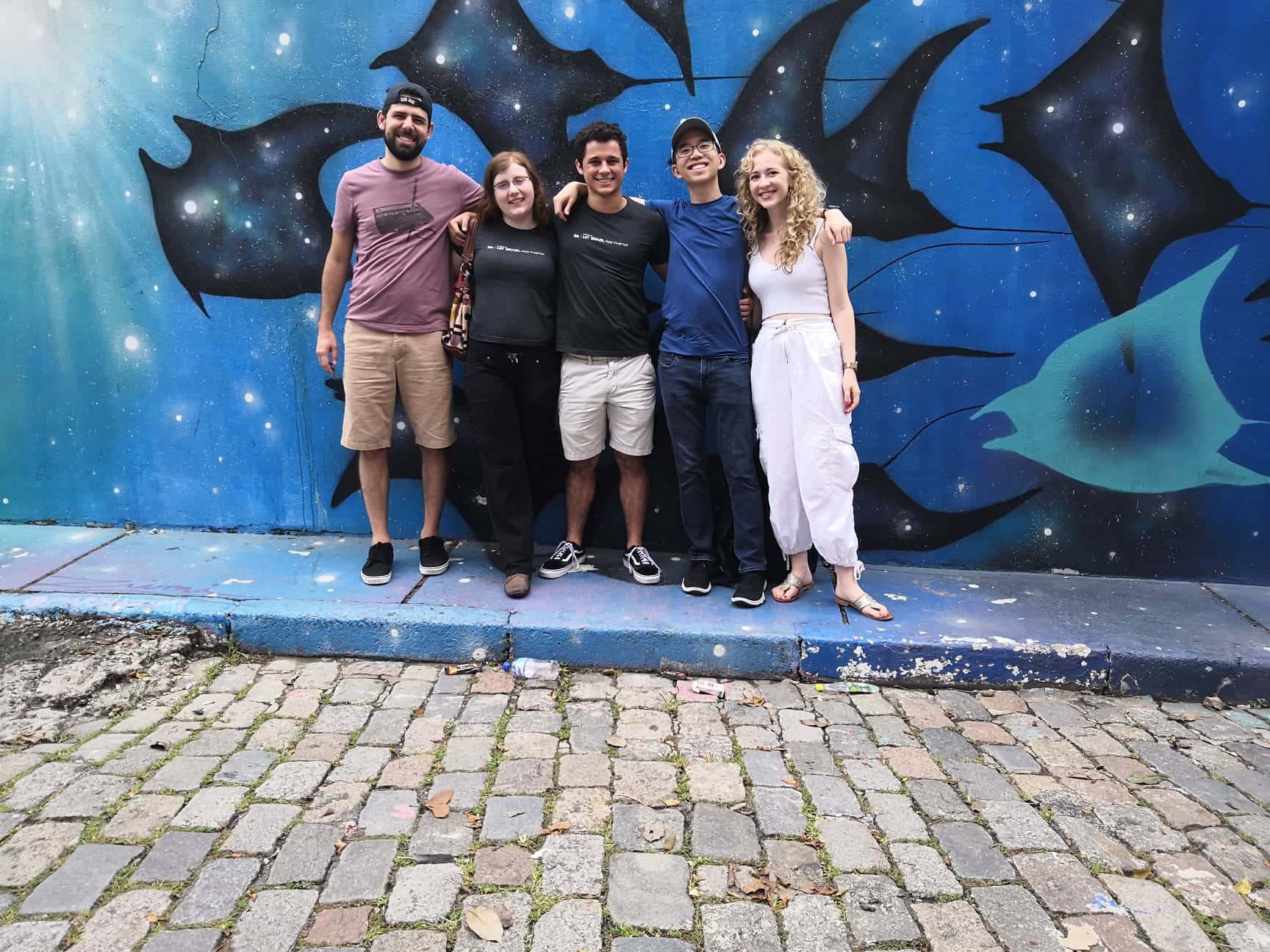 Image credits: Courtesy of C6 Bank of Brazil. You can watch a video produced by the bank linked below: